Hot child in the city

Did I tell you already? On Wednesday, I'm getting on another plane.

Oh yes, when the calender doth chime out June 29th, I will be getting on my airship at Pearson Airport....only this time, the destination isn't European. :( :( :(

Sadly, regretfully and so very unfortunately, I'm not heading back to the land of cobblestoned lovin' just yet. Instead, I'm flying allll the way west to Vancouver, British Columbia to start my summah job!! (Ok, so it ain't no Copenhagen, but Vancouver is still pretty rad.)

I work for the Maple Lodge Farms promotional team, and this year (just like last year) we're doing a big tour across Canada putting on BBQs and handing out free chicken swag for all of July. I blogged about this tasty trip last year, which you can refer to if you so desire by clicking on this linkety-link-link.

In between my Danish and Canadian adventure - ha! - I've been staying in Georgetown at my old house/parent's house. Howeva, last night I left the somber streets of suburbia and went back to the place that actually felt like home: 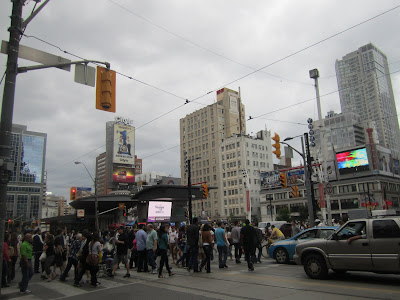 Normally, the mere concept of Kimberly in Toronto would totally not be blog-worthy. But after 5 months on a whole other continent, there is rather something special about this idea.

As soon as I walked into Dundas square from the subway, I felt MASSIVE pangs of excitement and wonder as I stood there in a familiar vibe of absolutely sparkling VIBRANCY!!! I just started laughing out loud and started taking pictures in every direction as I walked into the middle of the square. HA! I'm home and I'm still a tourist. 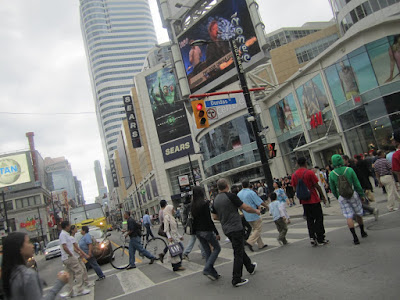 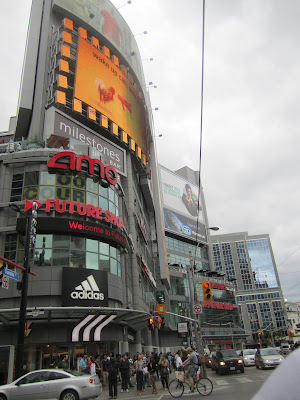 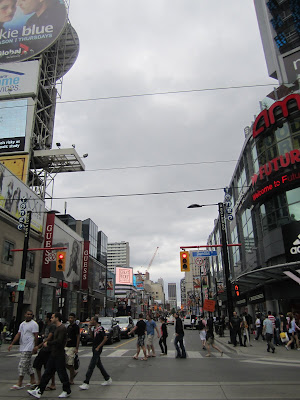 But that's what I felt like! Standing there, surrounded by lights and sounds and the most comforting summer breeze, I felt a renewed sense of amazement in my own city, just as I had experienced on my travels in Europe. I just wanted to TELL someone about it!!!

I tried calling Marieke in Belgium from my cell phone, but the stupid number wouldn't connect. BLAST! I ended up calling my Mom instead. Hee! But it was good to share my excitement with someone, if not a friend from overseas!

GARGH. That's the thing!!! I just wished SO deeply that my international friends could have been standing there with me!! I really can NOT wait to show them Toronto!!!!!!!!!! 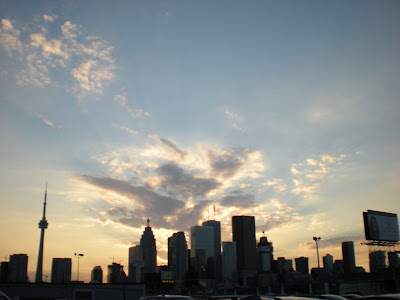 The night took me to Sara's house for a LOVELY movie-esque reunion, then to the new Salad King restaurant on Yonge Street - (Adrian, BE EXCITED) - then up to Bloor for some good ol' Mill St. Organic beer where we met up with some other coolios from schoolios.

Yee, local Toronto brewskis are de bomb, but at one point, I passed a poster on the wall with a picture of a Carlsberg on it:

"The finest beer from Copenhagen"

When I saw the poster, I was happy and sad and baffled all over again.

And even MORE weird that I was home. It was so strange to look out the open windows in the bar and see Bloor street, and then walk back to the Bathurst subway station at the end of the night and pass Honest Ed's, still all lit up, 5 months later.

From Berlin, to Barcelona, to Istanbul, to Toronto...

And the whole time I half-expected the TV class to walk through the front door.
Posted by Kimberly Ivany at 6:47 PM